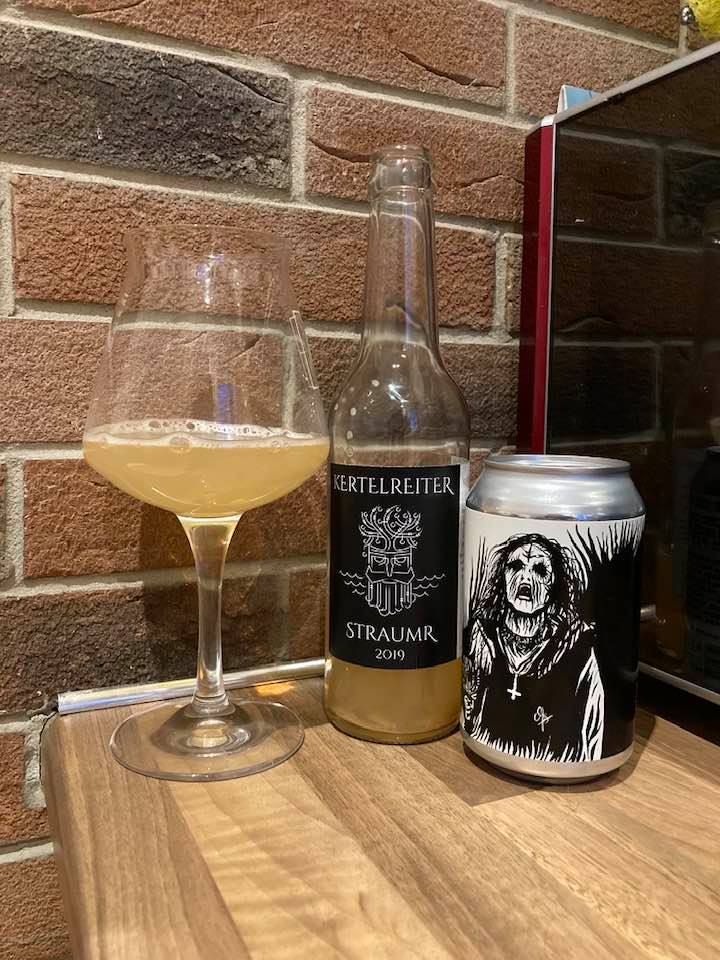 Kveik! What’s that then?

This week I’m looking a little at the intersections of boozy venn diagrams. Yesterday I explored the marriage of grape and apple; today we have two apple-only creations that have borrowed from the world of fermented grain.

I am no expert on the subject of beer. (Indeed I’m no expert full stop, just a compulsive hobbyist.) But there has long been a general overlap of interest between cider and beer; many outstanding modern cider commentators – Lily Waite, Ben Thompson, Matthew Curtis, Helen Anne Smith, Pete Brown, Anthony Gladman to name a handful – have malt and hop in their souls, and although the differences between the two drinks are stark and important, we’d be remiss to think that there is nothing in terms of production or culture that either can learn from the other. Cider is often drunk in the same places and ways and for the same occasions as beer and both, after all, are the result of the ministrations of yeast on a source of liquid sugar.

Which brings me back to Kveik. For a proper dive into what it is, and the significance of its presence in modern beer (as well as a wonderful coffee-break read) this article by Claire Bullen on Good Beer Hunting is essential eye-fodder. But in brief, Kveik is a family of Norwegian farmhouse yeast which ferment at furious speeds and very high temperatures, said to lend a marked tropicality to the resultant beer’s flavour.

Despite being the unifying character in every alcoholic drink’s cast, yeast is notably underdiscussed in modern cider at a publicly-available level. Much of the existent writing on the subject is limited to a presented dichotomy of “wild yeasts” (indigenous yeasts that exist everywhere, including on the skins of apples and the equipment in a cidery, and will naturally commence fermentation of pressed juice if left to their own devices) versus “pitched yeast” (a specifically-selected strain introduced to the juice to supersede the wild yeasts and offer a more controllable and predictable fermentation). Generally speaking, at least amongst purists, wild yeasts are lionised a. for being “more natural” and b. for, by their diverse and multitudinous nature, offering a more “complex” result. Such is the dedication to wild yeasts by their disciples that, in a fascinating panel discussion I watched at this year’s online CiderCon, all four speakers were instant and emphatic in their chorus of “I don’t pitch” when the subject was raised.

But is this slightly reductive? I’m more than happy to hold my hand up as a card-carrying wild yeast enthusiast. I find the idea of them to be remarkable and compelling and their liquid results to often be mesmerising and delicious, but I do think that pitched yeasts merit more consideration than they are often given. For a start, the term “pitched yeast”, as it is generally used, implies just one specific strain being used for all pitched-yeast ciders, and that demonstrably isn’t the case. In my years writing about whisky, individual strains of yeast were an increasingly hot topic among both distillers and enthusiasts, with the different properties and merits of “brewers yeasts” and “distillers yeasts” at the forefront of discussion. The Cotswolds Distillery, to choose just one example, uses two separate strains in the fermentation of their wash, whilst The Lakes Distillery team ferment their wash in three separate batches, each with a different strain of yeast. Kentucky’s Four Roses boasts five strains of proprietary yeast with which distillers can conjure differing organoleptic spells, and bourbon distilleries in general are famously protective and reverent towards their house strains. Pitched yeasts can clearly offer fascinating and diverse approaches to generating flavour.

An early example of this that I encountered in cider was Soul Trader from London’s Hawkes. It was a single variety Braeburn that had been fermented using a Sauvignon Blanc yeast and billowed with all the fresh, green, lime-and-gooseberry aromatics you’d expect of that white wine. Another pitched yeast of special significance is ec118 – saccharomyces bayanus “champagne yeast”. As Eden’s Eleanor Leger pointed out in our January interview, not a yeast that makes cider taste like champagne, but one that can perform a specific role: namely begin a new fermentation in a liquid that already has alcohol in it.

If we are to encourage innovative thought in every respect of cider – which we should – then yeast is a subject with which we should keenly engage. And today’s offerings, both fermented with strains of Kveik, have done just that.

Our first comes from Ascension, a Kentish cidery we’ve previously met in the form of their excellent Wild Wood Laphroaig Cask #2. Ascension’s Matt Billing presented at the April meeting of Manchester Cider Club, and one of the expressions put forward to taste was this Voss Kveik Russet. As you’d expect, it’s a single variety Russet cider which has been fully fermented to dryness with the Voss strain of the Kveik yeast family. A 330ml can (another tick for beer fans there) costs £3.50 from The Cat in the Glass. At the time of writing it’s not listed on Ascension’s own website, but it may be worth checking again when this review comes out, just in case.

How I served: Chilled

In the mouth: Nose translates near-perfectly here – that fresh pineapple and mango and nutty, russety apple. There’s an in-mouth tropical perfume that reminds me of aromas I’ve encountered in long-fermented wash at whisky distilleries. Big, ripe and juicy. Not much acidity (Egremont Russet doesn’t have much) but it’s crisply structured and not at all flabby. Really easy-drinking; another proof that “dry” doesn’t equal “scary”.

In a nutshell: A big mouthful of joyful tropical fruit. Lovely stuff.

Germany’s Kertelreiter is a cidery with significant form in these pages. I loved the flight I tasted as part of a spotlight piece last year, and was just as impressed by the Lacrimae Mundi that was part of a trio of dry ciders in a subsequent article. So high mental standards are set for Barry Masterson’s creations, to which Straumr 2019, his own Kveik-fermented cider, will now be duly subjected. I bought my 330ml bottle back when getting parcels shipped over from Europe wasn’t a brain and wallet-mangling labyrinth, and it cost me about £4.

How I served: Chilled

Nose: See “colour”! This is even more intensely pineappley than the Ascension. Pure, fresh, pristine pineapple right off the tree. In fact so broad and clear and clean and vibrant is that pineapple note that other nuances orbiting it are almost beside the point. The focus here is pineapple, and a gloriously aromatic focus it is too.

In the mouth: The Lilt theme continues, though the pineapple is less dominant, such that elements of yuzu and ripe apple and lime juice join it too. A tropical holiday in a glass (which, since at the time of writing I’ve just yesterday seen pictures of Barry being blasted by Germanic snow, is an irony I’m enjoying tremendously). Like the Ascension it’s bone dry, but so ripe and juicy of fruit that you’d almost think otherwise. No tannin but a fairly full body and lovely refreshing acidity that is never obtrusive and which complements the fruit to perfection.

In a nutshell: Pristine Lilt for grown-ups. Another superb Kertelreiter.

If this is what Kveik can bring to cider’s party then I, friends, am all for it. An immensely clued-up beer pal expressed concerns prior to the Manchester Cider Club tasting that the intensity (and, particularly, heat) of a Kveik fermentation might be to the detriment of apple juice’s freshness, but he and I both agreed that these fears were not realised in the finished liquid.

Ascension’s Russet has bloomed to its fruitiest potential under Kveik’s influence. The essence of the apple has almost been magnified and has been garlanded with a budburst of tropical fruit. Whilst I’m not sure which varieties Barry used in the Straumr, they clearly contained a more acidic element, which has dovetailed deliciously with the huge pineapple nuance that Kveik has conjured.

If I were pressed to pick a favourite I would um and ah and nod discreetly towards the Kertelreiter, but this is another of those happy occasions when picking a favourite is immaterial. Our readers lucky enough to still be part of the EU should hoover up any Straumr that may still be available, and our readers in the UK can cheerfully fill their fridges with the Ascension. Tremendous drinks and tremendous value both. Two cheers for Kveik, and two more for adventurous and thoughtful exploration of the possibilities of selected yeast.