Last time I graced these pages I wrote about the Kingston Black, one of the world’s most well-known and revered cider apples. I touched on Single Varieties and how the cider world is a long way behind wine in celebrating individual fruit. Where it is progressing, the focus is fairly aimed towards cider varieties, so I thought why not shine a light on something a little less obvious.

That led me to the Egremont Russet, an absolutely delightful apple to eat, is full of history and one that is gaining some traction and following as a single variety cider making fruit. It’s a fascinating apple for several reasons, firstly it’s flavour profile; that nutty almost dry flesh has a distinctive creaminess to it; it’s not a juicy apple to eat. Secondly is the resulting cider which slips between the cracks of the most common styles and descriptors, being neither acid nor tannin led, neither sharp nor bitter. Thirdly is the sugar content, which as you’ll see with the ones I’m tasting, is consistently pretty high. In fact Sam Nightingale (who kindly donated the bottles for this article) explained to me that it’s the highest sugar and lowest acid he sees every season out of all the different varieties he presses.

That makes for challenging work as a cider maker, if you want to stick with “the whole juice and nothing but the juice”, then high sugar equals high abv. Creep above 8.4% and you’re into “Made Wine” duty which is higher than cider. Low acid, on the other hand, can leave cider more susceptible to faults and off flavours. So why is this apple gaining such attention? Why is a producer like Little Pomona (who’s creations have graced these pages a few times) who normally favours cider apple varieties being lured over to the eating apple side? Their 2019 Egremont Russet (inspired by Sam’s) was chosen by your very own Adam Wells at his Manchester Cider Club debut to demonstrate lessons cider can learn from wine.

Last time I also touched on Vintages, as Adam has done many times on these pages, and how they permit the drinker to gain real insight into the terroir and climate of the year. If you’re able to have a vertical tasting of a number of vintages you can see the changes between years. So this time I’ve been very fortunate to have three consecutive Russet vintages from Nightingales. Sam hasn’t released any Russet ciders past 2016, so you’ll see with these three; 2016, 2015 and 2014, that I’ve gone so far back the oldest bottle bears the “Gibbet Oak” branding; the Nightingale predecessor.

Where to start? Well, the oldest of course. 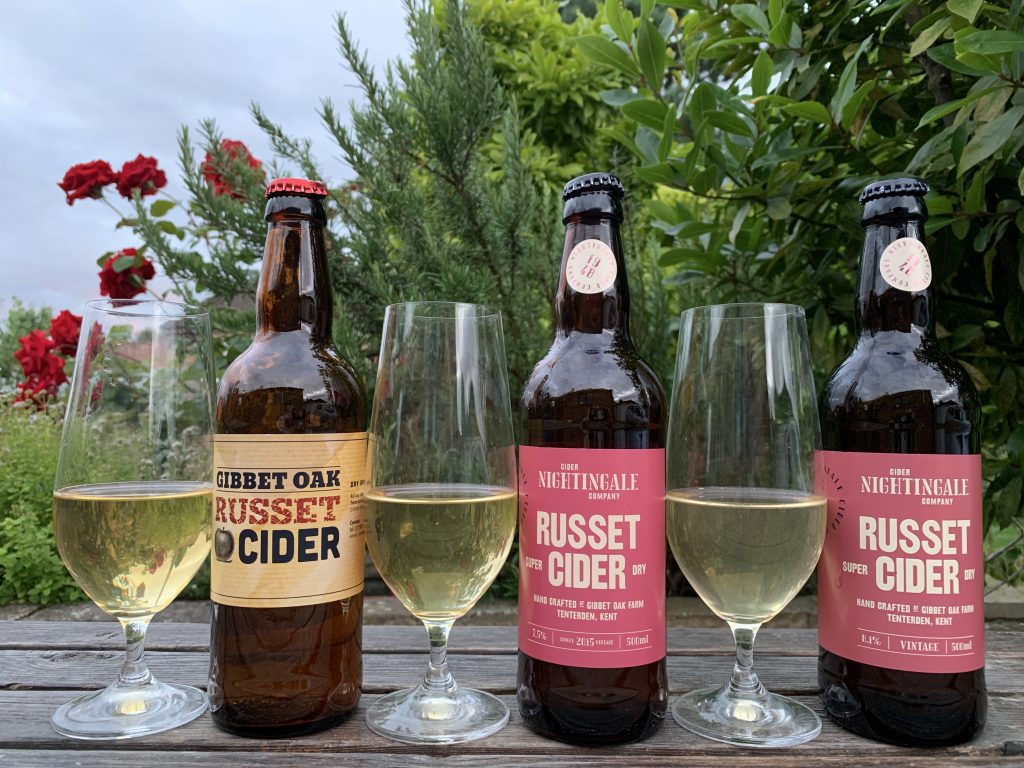 On the nose: Wonderfully fruity, honey and cantaloupe with a slight citrus note leading into honeysuckle blossom.

In the mouth: initially you get the nutty creamy character stereotypical of Russet that’s gone through malolactic fermentation. This is then followed by exceptional fruit with a perception of sweetness and juiciness. There is almost zero acidity in the smooth finish that’s full of lemon balm. There was a whisper of oxidation, but for 6 years old that’s not unexpected.

On the nose: wow, totally different, still fruity but more tropical and with bitter citrus like grapefruit.

In the mouth: again, very definite Russet with that creaminess. There’s more acidity but it’s still gentle. Some of the fruit is lost compared to the 2014 and the finish is more finite. There’s also a savoury minerality to it, with a wet slate texture, not that I’ve ever really tasted wet slate, but it’s what I imagine it would taste like if that makes sense.

Colour: not much difference to the 2015, apart from a slight haze.

On the nose: very fresh, nectarines, apricots and cut grass.

In the mouth: this tastes more alcoholic than the others, and it is with an extra 0.6% over the other two. The fruit is there and again it’s full of that creaminess, but this has the most acid of all. There’s minerality but the finish is full of vanilla. Left in the glass this then starts to morph into lots of honey-like notes.

For me, the 2014 was the star, the way the fruit is expressed right now is fantastic and the nose if just delightful. I’ve always been a fan of the 2016, but it’s the only one of the three I’ve tried before. Putting them all next to each other, it’s probably my least favourite of the three. So I plan to keep a few bottles for a couple of years and see what time does to that vintage. 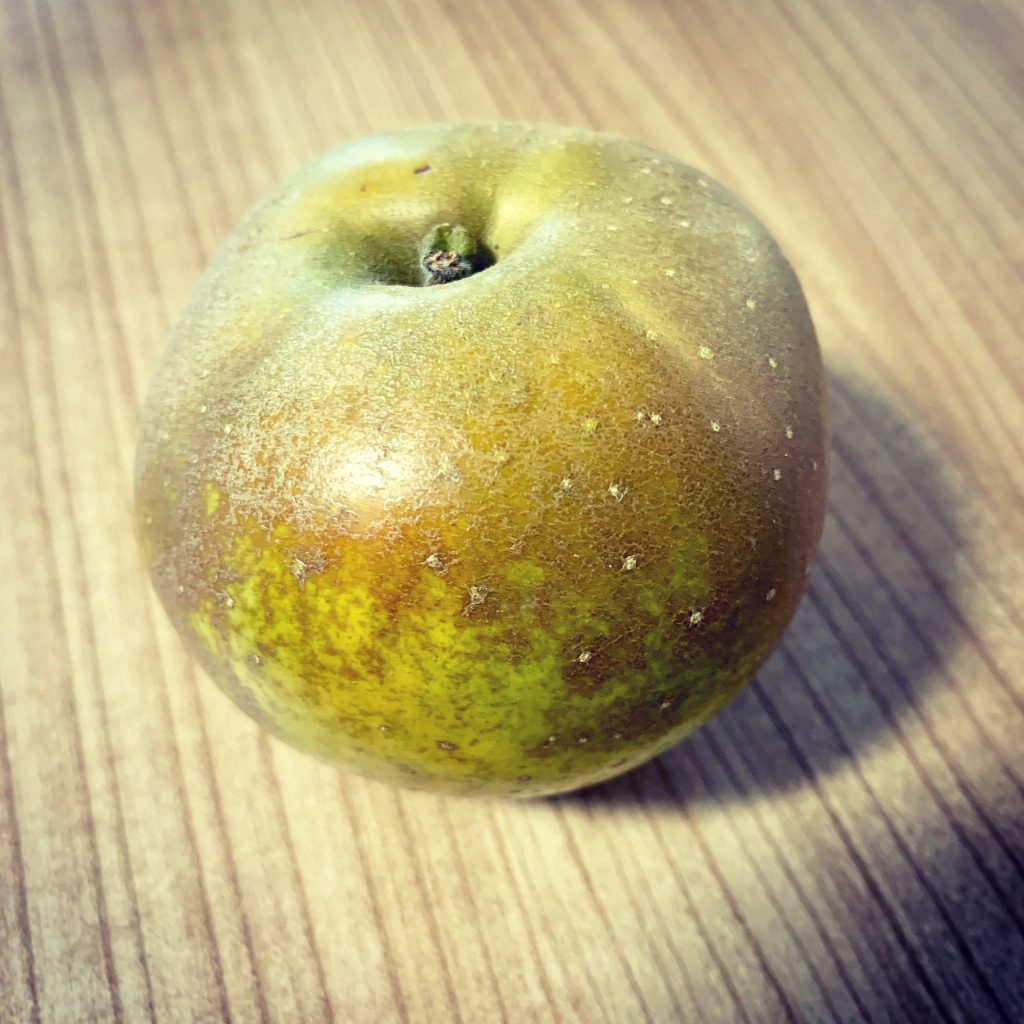 On the apple itself, I have to say I’m a bit entranced. Normally I like bold flavours, but the subtle, delicate and vinous qualities that it presents as a cider are fascinating. Sadly the back catalogue I had the opportunity to taste are not for sale and the 2016 is almost finished, but I would highly recommend seeking out other Egremont Russet ciders.

Of course Egremont Russet is only one russeted variety, of which there are many. If you haven’t read Episode 3 of Full Juice magazine, you should go and have a look. There’s a great piece by Gabe Cook on russeted apples and their history.