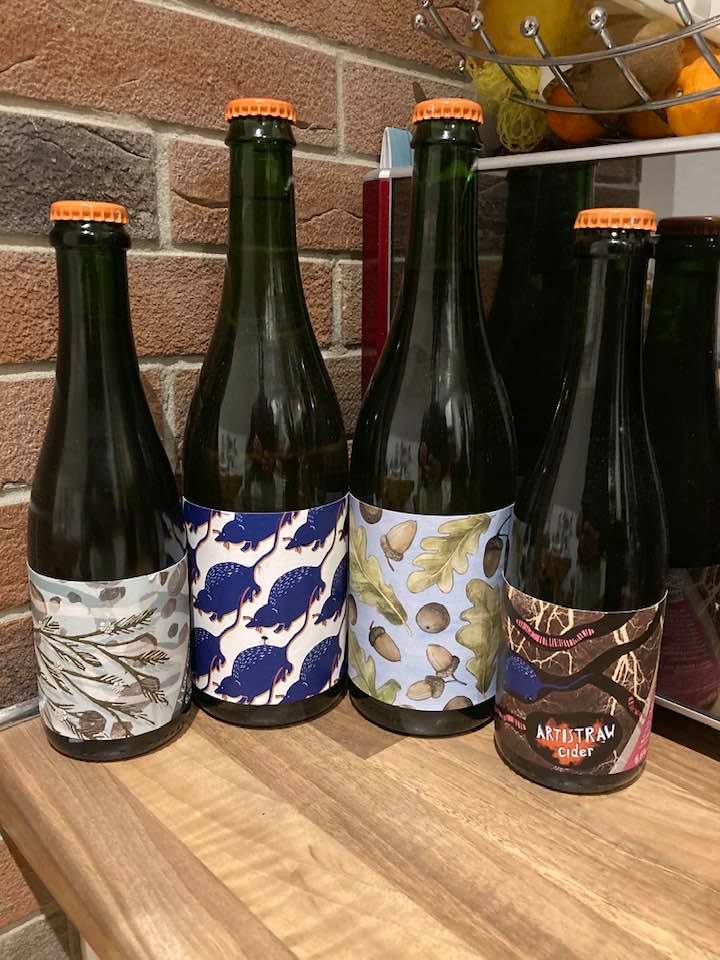 One of the great joys of being involved in cider’s online conversation is seeing, from time to time, a cidery suddenly seem to gain confidence or momentum. To perhaps join in with increased relish or to be recognised by a swollen crowd of drinkers as a gem worth seeking out and showering with praise.

A good example of this, just over a year ago, was Caledonian Cider, who have gone from being little-known outside Scotland to being a popular favourite and active participant in the cider bubble. Smith Hayne, I would argue, are starting to (deservedly) follow a similar trajectory, ditto Barley Wood Orchards and a handful of others. Confirmation bias? Perhaps – we all tend to see that which we’re looking for – but in this instance I’d suggest it’s borne out both by apocryphal evidence and hard sales figures.

And in the last few months, one cidery which has been absolutely flying has been Artistraw.

When I first encountered Artistraw they were one of Herefordshire’s many in-house treasures; discoveries to be made at local farmer’s markets or, in my case, the well-proportioned shelves of the Cider Museum. And perhaps, had the pandemic not happened, and those routes to market remained the most obviously-available ones, that would be how they would still remain.

In fact even back in September, when I popped by their orchards with Mr Finch and was charmed enough to write this gushing paean, it was still impossible to buy Artistraw online. But since then the meteoric rise of The Cat in the Glass has brought Artistraw to a wider audience, followed by the launch of Artistraw’s own website, and it’s fair to say that the audience has been receptive.

Hardly surprising. Not only have Artistraw ciders been historically excellent, but their balanced sweetness sits in line with the likes of Pilton, Barley Wood, Bartestree and Wilding – all of whom find heavy favour among the online cider community and offer broad appeal beyond it. But it’s more than the ciders; as I said when I first wrote about Artistraw, the people behind the bottles are an inspiration – the sort of people you want to see succeed, and whose story you want to in some way attach yourself to. Tom and, particularly, Lydia, have played active roles in bringing that story to new ears in the last few months, not least through Manchester Cider Club’s Cider Women Edition in December (Lydia is a founding committee member) and James’ more recent Fine Cider Friday series in May, which Lydia says resulted in Artistraw’s busiest online sales hour to date.

Anyhow, amidst all this excitement it occurred to me that despite having written about them previously, I’ve never featured reviews of Artistraw ciders on these pages, and their launch of four new expressions seemed a reasonably sensible time to change that. (I’m crossing my fingers that they’ll still be available when this article lands).

All four are 2019-vintage pét nats*, unfiltered, unpasteurised and hand-picked from traditional unsprayed orchards. And I must say that the attention to detail on the labels – in every respect – is exemplary. Varieties are listed (except in the case of Woodseaves Oak Apples, which is an orchard blend), methods, vintages and ingredients are listed as well as the story behind each cider and, for the Kingston Black and Woodseaves Oak Apples, its orchards of origin. The labels themselves are absolutely beautiful; some of the most attractive of any cider I’ve encountered, and it will surprise no one who read my previous article or has encountered the Artistraw team to learn that Lydia drew them all herself. In fact in several instances she created her own paints, and was telling me about growing woad for future batches. I will never know where she finds the time.

All the Artistraws are priced at £4 per 375ml bottle or £8 per 750. At the time of writing you can find them on the Artistraw website here.

First up is a pair that intrigues me because the apple blend is the same in each instance: Dabinett, Chisel Jersey, Ellis Bitter, Yarlington Mill and Bramley. Both are pét nat ciders, both dry, both from fruit pressed in 2019. The key difference appears to be the alcohol percentage, which is 6.2% in the case of A River Runs Shrew It (they love a pun) and 6.6% in the case of Subterranean Homesick Shrews. Different batches of the same pressing? That’d be my bet, but do pop any more-informed answers either on a postcard or, less arduously, in the comments section.

Another difference is that A River Runs Shrew It donates £1 per bottle sold to Friends of the Upper Wye, a charity with which both Lydia and Tom are heavily involved and which is aiming to slow the alarming rate of pollution in the Wye. You’ll find more details on Artistraw’s website as well as in my previous article.

Colour: Golden amber (colour credit to the geophysicist here – I felt I’d been using various takes on ‘gold’ and ‘amber’ excessively lately, so I thought I’d get a fresh perspective. That panned out well …)

On the nose: A teensy waft of reductive sulphur initially, which blows off very quickly leaving orange zest, dried pink grapefruit and a little bright green apple. A touch of meaty savouriness which I feel is part Chisel Jersey and part just a touch of brett. When brett is to excess it can be overwhelming, but here that light touch of leather plays a savoury second fiddle to Dabinett’s sun-filled song and the lifting, lightening role of the Bramley. A touch of forest floor too. It actually all comes together really nicely.

In the mouth: The driest Artistraw I’ve tried yet, though has the same brisk brightness as the nose, whilst not being at all ‘sharp’. The fruit begins as pith but grows juicier in the mouth until a drying rasp of tannin comes through on the finish. Apricot, peach, bitter orange. This is really satisfying, tasty blending. And to my money that touch of leatheriness adds to, rather than detracts from, the fruit in being very much a small additional presence rather than the overwhelming lead. You could keep this for a year or two or drink it now, ideally in the sunshine with some charcuterie.

In a nutshell: Dry, bright, fruit-forward textural delight with a balanced savoury edge.

On the nose: Unsurprisingly pretty similar! A little brighter and lighter though – there’s still a touch of that leathery tone, but to an even lesser degree – this is even more about the fruit, which takes on a more fleshy orange aspect. Despite its dryness there are echoes in this nose of really good Breton or Cotentin ciders.

In the mouth: Again, juicier than the previous, blood orange pulp and very ripe lemon to the fore. There is also a touch more acidity than in Subterranean though again you certainly wouldn’t call this ‘sharp’. Big clean apple juice. Absolutely all about the fruit, this one. That dry lick of tannin in the background adding structure and a refreshing, light, coarse grip.

In a nutshell: Beautiful. Close my eyes and it’s dry French cider.

Second in line, and available in both formats, is the single variety Kingston Black. A triple-orchard blend with all the fruit gathered from traditional orchards in western Herefordshire, pressed in November 2019. I’ve tasted far more than my usual quota of Kingston Blacks recently for an article we’ll be publishing in two days’ time, so I’m coming to this glass with recalibrated high standards and an inclination towards extra pickiness. Sorry team.

In the mouth: The sort of delivery that makes you think the ‘King of Apples’ proponents may be onto something. The huge, exotic mango-orange juiciness continues; it’s full-bodied for KB but just lifted by refreshing, balanced acidity, a little touch of sweetness and the lightest graze of tannin. Spellbinding texture. Spotlessly clean, magnificent ripe intensity of flavour.

Last but by-no-means-least-but-we-won’t-know-for-sure-‘til-we’ve-tasted-it-will-we is the aforementioned Woodseaves Oak Apples orchard blend, named for a 900-year-old oak tree in the village of Eardisley. Although there ae too many varieties to possibly record (and most haven’t been listed in any orchard records anyway) Tom and Lydia tell me that it’s a blend of bittersweet varieties with heritage culinaries, so we’re anticipating something lower in tannin. Or, to steal from the web copy, something “light and refreshing, reflecting the earlier styles of Herefordshire cider”. Let’s have a taste.

Colour: Similar to above. Maybe a tone lighter. And this one, unlike the three before, is pretty fizzy.

On the nose: Follows the bright, fruit-forward theme, buoyed exuberantly from the glass on a springboard of carbonation. Apple skins, lemons. Some waxy yellow fruit. Quite floral too. If the others are various stages of summer, this one is the middle of spring.

In the mouth: Tastes as you’d expect. Cheerful fizz that brightens rather than overwhelms the fruit. Medium, for me, but the sweetness is matched by lemon zest and some surprisingly assertive tannins. This is another that nods towards France, albeit a lighter, brighter aspect of France than that recalled by A River Runs Shrew It. There are some definite Harry Masters’ Jersey-esque characteristics here too – vibrant yellow fruit and some muscular, not-quite-meaty phenolics. Another little brush of brett? Yes, I think so. But again, its lightness of touch means that the savouriness adds, rather than detracts. It’s all polished and energised by zingy, zesty sharps.

In a nutshell: Another vivacious, textural mouthful. The brightest yet – a fruit basket of joy.

Artistraw have knocked it out of the park with this flight. Not just the best set of new Artistraw releases I can remember, but one of the most consistently excellent flights of ciders I’ve tasted for this blog.

All are billowing with fruit, packed with aromatics, intense of flavour, beautifully fresh and just a joy to drink. They are also wonderfully textural ciders, with tannins and acidity working really well with the flavours, never letting anything feel heavy, never letting the off-dry latter two feel cloying. These are ciders for savouring; bottles that are delicious on their own but will also add so, so much to a meal.

If I’m shuffling them into an order of preference, I’d say the outstanding Kingston Black sits at the top, shortly followed by A River Runs Shrew It, with the other two a hair’s breadth behind. But all are wonderful – I am so impressed, and so pleased to have tried them all. They are also all drier than previous Artistraws I’ve tasted. An accident I believe, as, due to illness last spring, Tom wasn’t able to rack them as often as he usually does, meaning yeasts were able to ferment further. I would heavily advocate this accident (though not its circumstances!) being repeated. The fullness of the fruit, even in the completely dry bottlings, is ripe and juicy enough that sweetness isn’t missed. And the ciders simply have more energy, complexity and freshness without it. They’re delicious.

I’ve long had a high opinion of Artistraw, but this flight has elevated it considerably. They deserve all the attention they are currently enjoying. I can’t wait to see where they go next.

*Have a peek at our taxonomy of cider if any of the terms in this article are unfamiliar, or at our growing glossary of the flavours of individual apple varieties if you’d like more detail on some of those named above.