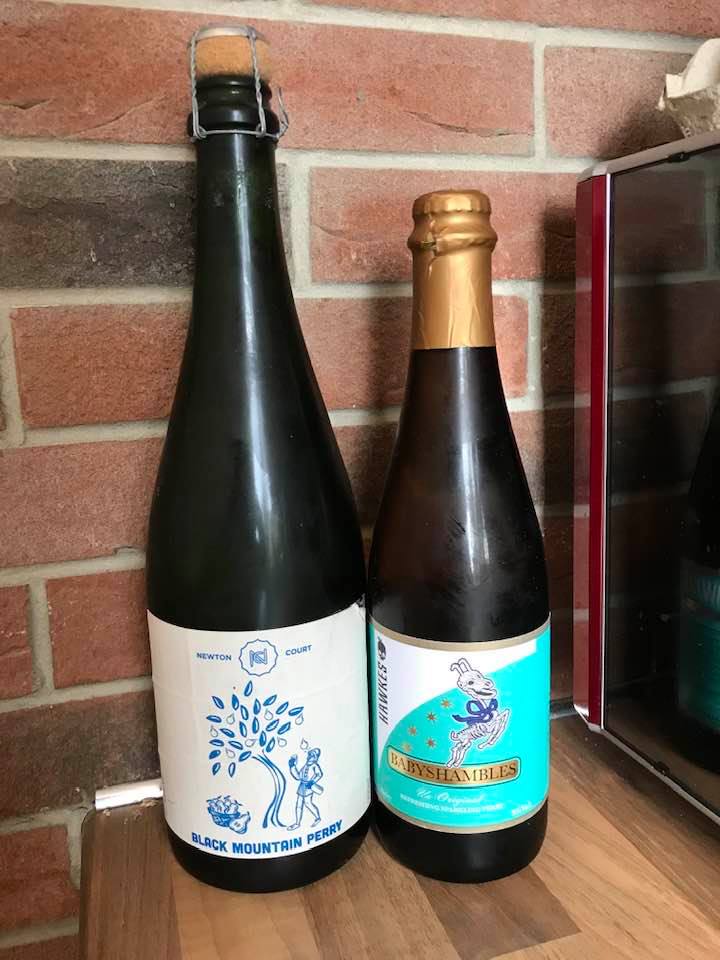 Perry’s chiefest problem is that so few people know what it is. “Want a perry?” “I don’t know” (as no hypothetical conversation probably ever went).

In our recent conversation, published this very morning, Ross on Wye’s Albert Johnson expanded a little on just why this is. About a decade ago the Swedish-inspired scourge of “fruit ciders” hit our pub fridges and Kopparberg Pear Cider was in the vanguard. I remember first coming across it in my tender university years and assuming – as I dare say many people did – that it was made from pears. It wasn’t until some time later that I discovered it to be mainly sugar water with a microscopic base of concentrated apple juice and a cursory dash of artificial pear flavouring.

‘Pear cider’ was later superseded in the affections of the everyday drinker by raspberries, kiwis and all manner of ersatz tropical fruits. But by then the damage had been done and Ross perry sales had been hacked, as we learned, from about 25% of their total to a meagre 6%.

What’s more, the term ‘pear cider,’ like a lingering fart, or a difficult to shift guest, still loiters in the British vernacular. Such that any explanation of perry to the uninitiated results in an inevitable “do you mean pear cider?” Anathema to the embattled perrymakers of the Three Counties and the South West.

Ostensibly calling perry ‘pear cider’ is no different, and no worse, than calling cider ‘apple wine’. It’s a broadly accurate description of what the drink is; something that is made in roughly the same way as cider, but which uses pears, rather than apples, as its base fruit. In Austria, which is one of the three predominant strongholds of the drink, their word is ‘Birnenmost’, which means effectively the same thing. And in Germany it’s more common to see ‘Apfelwein’ than any Germanic derivation of ‘cider’. If ‘pear cider’ helps to shift more perry then perhaps, goes the argument, it ought to be accepted and embraced. Language is an evolutionary process; does ‘perry’ really merit any more safeguarding than ‘thee’, ‘thou’ or ‘thy’, if the reduction of its use results in more glasses being filled and more trees being planted?

The second suggestion, seemingly more advocated by traditional makers than by modern, is that the word ‘perry’ be reserved for drinks made entirely from perry pears, and ‘pear cider’ be the catch-all bin for drinks made from culinary pear varieties such as Concorde and Comice. A suggestion that, to the minds of the traditional maker, neatly relegates drinks made from non-perry pear varieties quite literally to the Conference division.

Personally I’m entirely against this suggestion. Whether they are made from traditional cider varieties or from cooking and eating varieties, drinks made from apples are labelled ‘cider’. Even drinks made from non-vinifera grapes have the right to the moniker ‘wine’; no one’s calling vitis labrusca products ‘grape cider’, and quite right too. As far as I’m concerned, if it’s made from the juice of pears it counts as perry and ought to be labelled as such. Returning to the initial contention, for perry – proper perry, made from pears of any species – to coexist in a world full of Kopparberg and Rekorderlig’s neo-alcopop nonsense it has to sit clearly apart from those imposters, and the word ‘perry’ allows them to do that. Perry is a many-headed drink, a drink whose styles and flavours pitch every bit as broad a tent as cider’s, and just because Tom Oliver, James Marsden and the Johnsons naturally prefer to use their rightly-treasured and precious local perry pear varieties that is no reason to relegate or discredit the tannin-free perries made from the culinary pears of the East. It takes all sorts to make a world.

Perry is ascending, as Twitter’s excellent Mr Ian B, as staunch a champion of perry as you will find, succinctly pointed out this week. If it is to continue its ascent, as those of us who love it fervently hope that it will, then it must continue to explain itself on its own terms and in its own language. “Made similarly to cider, but from pears” is an entirely appropriate way of communicating what perry is to a new consumer, but I believe that “perry” must remain on the label. It has a history and identity that reaches back past Napoleon and the Shadow Orchard and Evelyn and Charlemagne and the Saxon Saints to brush the texts of Pliny; its name bears the weight and appreciation of centuries and if it were to fall out of parlance, to become simply a cider tagalong, it would be a grave and sad injustice indeed, likely to the detriment of the drink itself.

In short: whether you are a maker, a retailer, a publican or a drinker, let’s pitch the broad tent of perry over all of its properly-made styles and varieties, to the greater exclusion of those deceptive masqueraders which are nothing of the kind.

Time to drink some. In the spirit of this article I’ve lined up one which is a traditional three counties perry and one which, well, isn’t. Firstly, from Herefordshire, Newton Court’s bottle-fermented Black Mountain Perry, available from their website at £8 per 750ml pop. Newton Court, like Cwm Maddoc and Bartestree, is a maker whose name gladdens the heart of those in the know, but whose online presence is slight enough to make them relatively underspoken-of outside their home turf. Visit them in Herefordshire and their range of ciders and perries billows across a broad selection of single varieties. Shop online and it’s trimmed down to a handful of their more-popular blends, including today’s showpiece.

Second up is a rather louder presence. We encountered Hawkes last back in March via a review of their Bermondsey Barrel Kentucky Bourbon Cider, which included a brief precis of their history and self-appointed, somewhat debated status as the Saviours of Cider. They since bottled today’s offering, Babyshambles, as a first foray into perry and a typically irreverent swipe at probably the only perry that the general consumer will have heard of. I must admit, the design is brilliant and I wholly concur with the back label sentiment: ‘It’s time for a second coming.’ Hawkes’ contribution to the reconsideration of perry has been made entirely from culinary Conference pears fermented and aged in an oak-barrel. (Ex-white Burgundy, off the top of my head). Bottles cost £5 each per 375ml, but have since sold out as it was a very small batch. (I realise it’s annoying to read about something you can’t actually buy, but I had no other culinary pear perries with which to illustrate this article’s point, so I’ll just have to fall upon your indulgence.)

On the nose: Have to wait a little for those fizz fumes to blow off. Once they do, aromas are extremely complex; a beautiful confluence of terroir and fruit. We’re in Alsace Pinot Gris territory here, if a touch leaner. Green pear, lemon skin, sherbet, animal fat and wet slate. It has an immense and fascinating mineral character and a spicy herbiness too. Excellent concentration.

In the mouth: The dry arrival continues where the nose left off, all lifted by a creamy mousse. Stone and pear and citrus peel and petrichor. It’s brilliantly harmonious and diamond-edged in its clarity. Acidity and tannin are balanced; there’s not an excess of either. This perry is immensely of its place – a compelling, mineral advert for the fully-fermented perry pears of Herefordshire. A trace of autolytic almond and light yeast from the in-bottle fermentation. Just the lightest dusting. Gorgeous, and will drink for years to come.

On the nose: Very forthcoming, if on the straightforward side. Rich, fresh, soft pear with a green streak of dandelion stalk. Vanilla and butter from the barrel. Nicely judged though; it’s not over-oaked by any means.

In the mouth: Flavours continue in their broad, pleasant, crowd-pleasing strokes. In tandem with the oak the pears run to an almost Blakeney Red-esque honey and toast character. Lots more vanilla and a splash of butter. Oaked Chenin Blanc territory except that the acidity is slight. A little fresh tangerine adds to the pear fruit and a tiny touch of fizz adds a happy lift. Totally clean, nice, super easy.

There’s a quote from Andrew Jefford that I read around the time I got serious about wine and which has always stuck with me. “Drinking a great wine should be like shaking hands with a mountain – you’re drinking the very land where the vines grow”. It is the most compelling unpacking of the fascination of terroir-driven drinks that I can remember and has been a sounding board for whether I love, or simply really like, a wine ever since.

Newton Court’s Black Mountain Perry lets you shake hands with the Herefordshire hills to an extent that only a very, very few other ciders and perries come close to. It echoes Albert Johnson’s comments this morning on the characters and flavours that can only be found when you ferment a cider or perry to its fullest extent and then leave it there. You cannot possibly drink this without a feeling tinge of sadness that so few such things exist. I would pour it to any lover of great French white wine, confident that within its hues and nuances and mineralities would be chords which would sound a note in their soul. It speaks entirely of Herefordshire and perry pears; no other place and no other fruit could conjure this precise expression. It is a drink that can move you. It is, simply, profound.

The Hawkes is nice. Clean, broad flavours, well expressed. I like it; I look forward to my other bottles. It may well be the crowd-pleaser of the pair and it ought to be noted that it was the geophysicist’s preference of the two. Does it let you shake hands with the mountain? No. Does it move me? Not really. But most people don’t particularly care about such things. It is a tasty drink and I’m glad they made it. I’m especially glad that they called it ‘perry’.