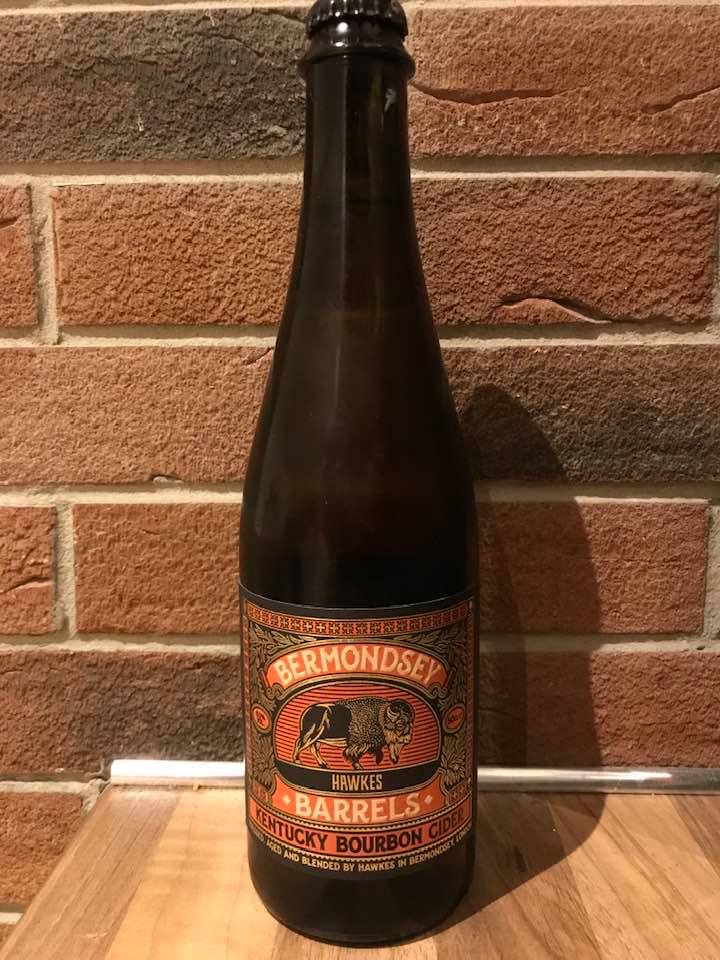 Today class, we’re going to be talking about wood. Yes, that knotty old subject is rearing its branches again; a cue for everyone to brace themselves for a good old pulpit thump, railing against the myths and misconceptions splattered around the whisky industry like so many oak chippings.

Except, as you’ll have seen from the header, today we’re back in the cidery, and since we’ve never really discussed wood when it comes to cider, today’s article is not a knackered old Malt gambit at all, but something fresh and new and wonderful and worth shoving into your eyes with relish.

Like more or less every other species of global booze, cider has been held in oak casks since time immemorial. For storage, initially, and – when the benefits became apparent – as an optional aid to flavour and style. Where cider differs from, say, whisky or wine, is that, as with so many of its facets, there hasn’t historically been a great deal of discussion around the oak itself.

Wine and whisky, as you would likely expect, have quite disparate styles of Quercus communication. When it comes to wine, oak is mentioned in terms of its origin and its freshness. Is it new oak or reused oak? And, broadly, is it French or American? (A few other nationalities of tree are available, but let’s stay in general terms for the time being or we’ll never get anything done.) Whisky also discusses the frequency of barrel use and, to a lesser-but-increasing extent, the provenance of its oak, but the headline tends to be what the barrel held before the whisky was filled into it.

If you’re a bourbon, the answer to that question is, legally, nothing. If you’re a malt, a blend, a grain it might also have been nothing (e.g. the Bimber Virgin Cask I’ll be reviewing very soon) but it is likely to have been either bourbon, sherry or another variety of wine. And, since the Scotch Whisky Association “relaxed its rules” at Diageo pistol point, also Tequila. Although not, weirdly, cider, which is held to be deeply non-traditional to Scotland, unlike Mexican agave spirit which early 19th-century gaugers were famously forever catching crofters necking by the bottle.

The cider breed of oak discussion has historically peaked along the lines of “yes. We have used it.” And that’s if a producer bothered to mention oak at all. The time-worn party line is that only ancient, knackered casks were any good for holding cider; that anything with a bit of life left would overwhelm the juice and leave you with a gobful of splinters and vanilla. On the whole, that’s not a position that encounters excessive argument from most cider producers and drinkers today. Oak has been treated simply as something to let the cider breathe a bit, to let the tannins unclench and to generally save the farmers from having to fashion a very large bucket.

At which point it’s time for me to raise a grubby finger of dissent. I wholly understand the need to let the fruit be the prime communicator. I realise that when Australian Chardonnay makers became a little heavy-handed with the chippings back in the ‘80s that the world turned its nose up slightly and headed for the zing and stainless steel of New Zealand Sauvignon. And I entirely accept and agree that certain apples are best kept well away from anything wooden whatsoever.

But to suggest that apples as a species are unilaterally incapable of withstanding a little oaken intervention is, to me, a little short-sighted. Tasting just nine varieties with Ross on Wye in January it could not have been clearer that the apple is not a “one approach fits all” fruit. I’d argue that the Harry Masters’ Jersey would have perhaps been well-served by a few months in casks; that an amelioration of lignin and vanillin might not only have softened the astringency of the tannins, but added additional layers to the fruit’s deep flavours. Whereas Reinette O’Bry seemed, to my taste, to be an apple that demands to be kept and drunk as fresh and unwooded as possible.

My suspicion is that the motivation against fresher, more assertive oak is as much fiscal as it is organoleptic. Barrels are expensive things, all the more so in recent years with the rekindled interest in wood-fangled spirits. Just look at the declining quality and freshness of casks being bottled by the independent whisky sector, a group with far heftier buying power than that of craft cidermakers. But it strikes me that producers prepared and able to take the bottom line plunge and invest in quality oak are in a rather nice position, being tied to neither the wine approach nor the whisky direction and so able to create their own discussion around the properties and pitfalls of oak in whatever way they’d like.

If they can be bothered.

Today’s review takes us distinctly down whisky’s garden path and is of a cider whose story is so intertwined with the barrel it matured in that its very name has derived from it. It’s the new Kentucky Bourbon Barrel edition from Hawkes, the first in their “Bermondsey Barrels” series, specifically designed to show the differing effects that various different casks can have on maturing cider. I’ve been told that they can’t give away the name of the distillery from which they bought these barrels, but we’re primarily a whisky reviewing website after all and … well … there’s a buffalo on the label. I feel most of our readership should be able to put two and two together.

Hawkes is a cidery I know pretty well, having visited them on a monthly basis since last June. On the first Saturday of every month, I lead a group of Londoners around Bermondsey, trying to explain to them what an apple is and all the fun things you can do with one, and this gaff is stop number two.

Built up from a model whereby they traded cider in exchange for apple donations from peoples gardens, they’ve become one of the biggest craft cider producers in the UK, thanks in no small part to Brewdog, who bought them in 2018. Much like Brewdog – quite possibly because of Brewdog – their style is very much brash and bolshy and belligerent and it’s one that inevitably tends to polarise. Particularly eyebrow-raising is their proclamation, on their twitter feed and cidery wall, that they are “the saviours of cider”. For which I’m sure cider is jolly grateful.

Nonetheless, they’ve a big old range of products these days, many of which I like a great deal, they’re less of a pain to find and order than other craft cideries can be, and if you pop along to their cidery on a Saturday afternoon you will find it stuffed to the guts with irreverent urbanites throwing back apple grog, all of which is A Good Thing. Their fridge is always full of interesting titbits from other cideries and their blackboard is always chalked up with guest kegs and collaborations. The UK, in my opinion, could do with a few more urban cideries and taprooms, something that Hawkes’ more razor-taloned detractors might do well to bear in mind. If there was one in Reading I would be there as often as global pandemics would let me.

Anyhow: back to today’s bottling. It’s a blend of unspecified Herefordshire cider apples and eastern counties cookers and eaters, matured for six months in those ex-bourbon barrels from the distillery that sounds a bit like Gruffalo Space and bottled at a darn tootin’ 8% abv. 500ml will set you back £8.50, which in American money is currently about 67 cents.

On the nose: The cask certainly giveth – lashings of dessicated coconut and honey and muscovado sugar. But it hasn’t taken too much away. There’s clean, ripe, fresh red apple in there alongside a little pastry. The aromas are slightly reticent to begin with, but they grow in the glass with swirling.

In the mouth: More intensity here across a broad, oily-textured palate lent an extra creaminess by just the lightest dab of fizz (actually a very well-judged quantity of fizz, the merest dab that lends weight and texture without detracting from anything. Nice work.) There’s an unctuous honey and apricot yoghurt thing going on – almost viognier-esque; a viognier/new world chardonnay hybrid, perhaps – but the sharper cookers and eaters add nice lift and refreshment. There’s very little tannin at all to be honest. Not sure what Herefordshire cider apples were used, but they’re not making their presence too overtly known. Definitely in oaked white wine territory for me. Satisfying, open, approachable and with a just a hint of decadence.

Nice. If you like your oaked whites, particularly of the new world, you’ll get a real kick out of this. My chums at the British Bourbon Society would do well to get involved too.

I’m curious about the blend of apples; I’m glad that there’s that zing from the cookers and eaters – there’d be a danger of everything falling flat and flabby without them – but I think an increased weight of fruit and grip of tannin would elevate this into still-higher territory. Nonetheless, as I say, nice stuff. I would – indeed likely will – buy it again, and I’ll certainly grab a bottle of whatever the next Bermondsey Barrels edition proves to be.

As a final aside, this is the hundredth piece I’ve submitted for Malt. Taylor pipped me to that particular milestone thanks to his freakish work-rate (though I’ve a hunch I’d edge him on word count) but it feels quite something nonetheless. I still can’t quite believe my luck at having been offered the gig here, nor the indulgence I’m afforded by my editors, who know how grateful I am. So I just want to say a thank you to everyone who has taken the time to read what I’ve written, whether this is the first of my articles you’ve found or whether you’ve waded through the full 140,000 words. It means the world and always will.