“In any case”, I continued, as breathlessly as one can when typing rather than actually talking, “the content will basically be the same. Provenance, care, corners cut, extra miles gone, ingredients, process, fermentation, dark arts. If they don’t read the tasting notes they probably won’t notice the switch. And who honestly reads tasting notes anyway?”

This excerpt came from my recent pitch to Mark to let me spam cidery circumlocutions all over his whisky website. As it happened, he’d agreed before I’d had time to type the second part of my wheedlings – though I finished typing them anyway because I Will Not Have My Words Go To Waste.

So, yes. Though I will, for the most part (not exclusively of course – don’t worry), be writing about a different liquid, the themes of the writing; the thinking, the ideas, will be broadly unchanged. Same tune, different words, if you like. And I hope that such interested drinkers as the handsome-and-wise Malt readership will join me for the ride. (To those of you who are cider lovers visiting a nominal whisky website for the first time: welcome. You are hereby handsome and wise too.)

My parallel theme du jour is consistency. Or, indeed, lack thereof. There is much to be said for consistency. It can be a great comfort to the travelling drinker to wander into any watering hole in the world, knowing that their pint of Stowford Press, their double of Johnnie Walker, will taste just as it does in the pub down their road. Consistency is the mantra of the megalithic brand; they wouldn’t be megalithic if it wasn’t. And it has, as I say, its place. If the Co-op changes their salt & vinegar crisps I shall put on war paint.

But to those of adventurous palate, consistency is largely dull. Mark has written wonderfully about this here and here. When it comes to whisky or wine or cider I don’t want everything to taste the same. To be blended into homogeneity. I love, for example, Millstone 1996 American Oak or Little Pomona Cryo-Conditioned precisely because they are unrepeatable. Because the next bottling will be different, whether subtly or profoundly. Because I don’t, and will never, know it all. Because there will always be another flavour.

Inconsistency – differences – breed comparison. Comparison breeds interest. And interest breeds a culture of appreciation. There is a reason that blended whisky makes up 90% of the market and about 5% of the column inches. It’s the same reason that I’m not writing this piece about Strongbow. “Magner’s Golden Draught remains as-was” isn’t really a conversation starter.

Inconsistency inevitably increases when you enter the world of the small-batch. And again when a producer starts dealing in vintages. Most of the winos I know had their enthusiasm sharpened at some point or another by doing a vintage “vertical”; by discovering the ways that subtle changes in blending and the vagaries of annual weather have tweaked and reshaped what is otherwise broadly the same wine.

This interest in vintage has only recently been given real focus again by cidermakers, but along with style and apple variety I believe it to be one of the three major potential cornerstones for cultivating a more interested and educated community of drinkers. Personally, I want to taste the differences between Ross-on-Wye Foxwhelp from 2017 and 2018. And then learn why those differences have manifested themselves. If Downside’s Special Reserve Perry 2017 had tasted exactly like their Special Reserve 2016 I’d have grumbled and tutted. (Though not much, as Downside’s Special Reserve 2016 is probably as good a perry as I’ve ever tasted.)

In the spirit of all things small-batch, vintage-dated and inconsistent, I should introduce Bignose & Beardy. They’re a Sussex-based duo who, like so many modern cider startups, began by making tiny amounts of cider from mainly-garden-harvested apples in a small shed and have graduated to making less-tiny amounts of cider from partially-garden-harvested apples in a slightly bigger shed. At the time of writing, they make around eight different batches of cider per vintage, the batches themselves varying year on year. They still get apples from gardens, though these days they’re supplemented by several local orchards. There’s a little more information on their website or you could read this article by the excellent James Finch. They also loomed large in the inaugural episode of Emma Inch’s new podcast, Cider’s Web.

One particular idiosyncrasy is their cider club. This is partially just a monthly subscription box – rareish for cidermakers, but nothing out of the ordinary. What sets it apart is the invitation to members to come along and help out with the making of the cider itself. The harvest, the pressing and so forth. I’ve written about Founders Clubs in whisky recently, and for varyingly eye-watering sums of money you can drop in at certain distilleries and pitch in with a bit of work. To me, Bignose and Beardy’s club seems altogether tighter-knit. Warmer, somehow, perhaps. Less a license to print money (admittedly few such licenses exist in cider) and more a genuine attempt to foster something of a community. And £15 a month for six bottles of cider each time strikes me as jolly good value.

The three bottles I have in front of me today are Boar’s Head, Oast Toast 2017 and Spartan 2018. Boar’s Head is a blend of an eating apple (Cherry Cox), a cooker (Howgate Wonder) and the classic bittersweet cider apple, Dabinett. Oast Toast comes from their original orchard and blends Cox, Bramley and Red Gloss. This 2017 is the last batch they’ll make of it, as Oast Fruit Farm won’t be providing them with apples any more.

Finally there’s Spartan 2018, which particularly stood out for the opportunity to make niche ancient-historical snipes (is it a coincidence that they’ve gone or a particularly Leonidas-y look with the label?) It’s also the most intriguing blend – Dabinett and Michelin, of Ross on Wye’s Raison d’Être fame, teamed up with Spartan, an eating apple. All I can say is if you’re going to take the Raison d’Être blend and put eaters in it, it’d better be jolly tasty, and it’d better be as dry as the label suggests, or you’ll have the Johnsons down on you like … well like a million angry Persians. And you’ll soon find yourself in hot springs.

Before I tuck in, because I’m sure you’re wondering, the name Bignose & Beardy apparently derives from the most prominent features of cidermakers Phil and Steve. So there you go. Perhaps if Malt contributors were to bottle our own cider we should trade under “Grumpy, Snarky, Moany, Ranty & American”. Though I hope we don’t. (And I’ll leave you to match the epithet to the contributor as you see fit.) 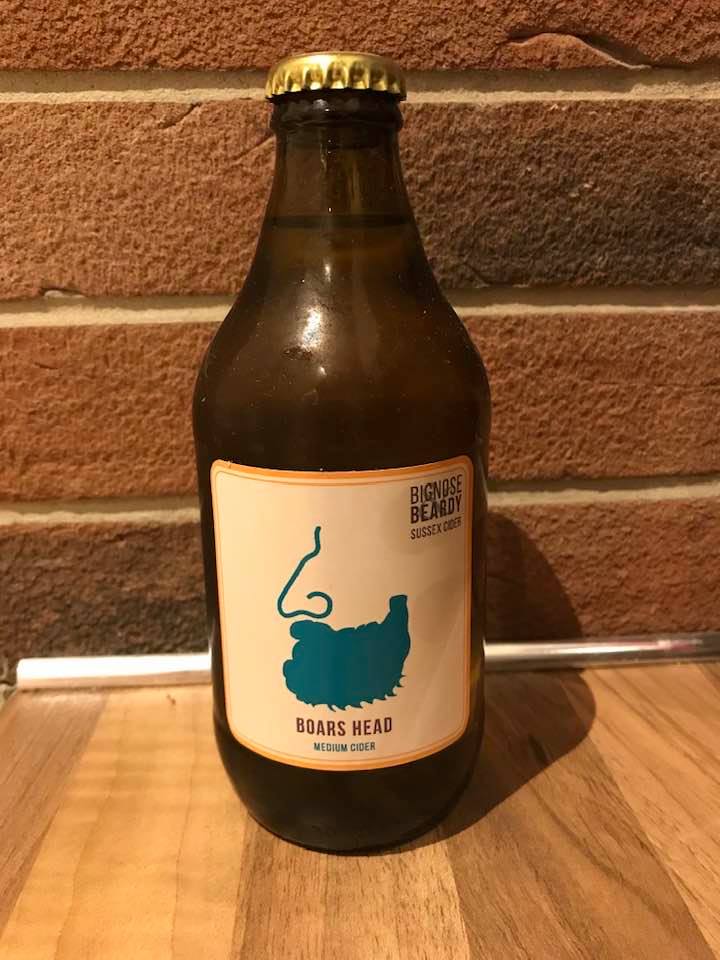 On the nose: Mild, trending in a cut grass and hay direction. Green apple and lemon rind. In fact the lemon takes on almost a citrus-detergenty inflection, though in a far nicer way than that makes it sound. Very light and fresh. (Got an “ooh” from the geophysicist, who is often a sterner critic than I.)

In the mouth: Again that lemony zip in a “the surfaces in this room are all freshly cleaned” sense. It’s on the drier end of medium, though not at all austere; the acidity zingy but not puckering. Only the lightest, lightest dusting of tannin from the Dabinett. This is clean, friendly fare; citrus and apple and lime-chewit notes softened by delicate vanilla. Tasty. 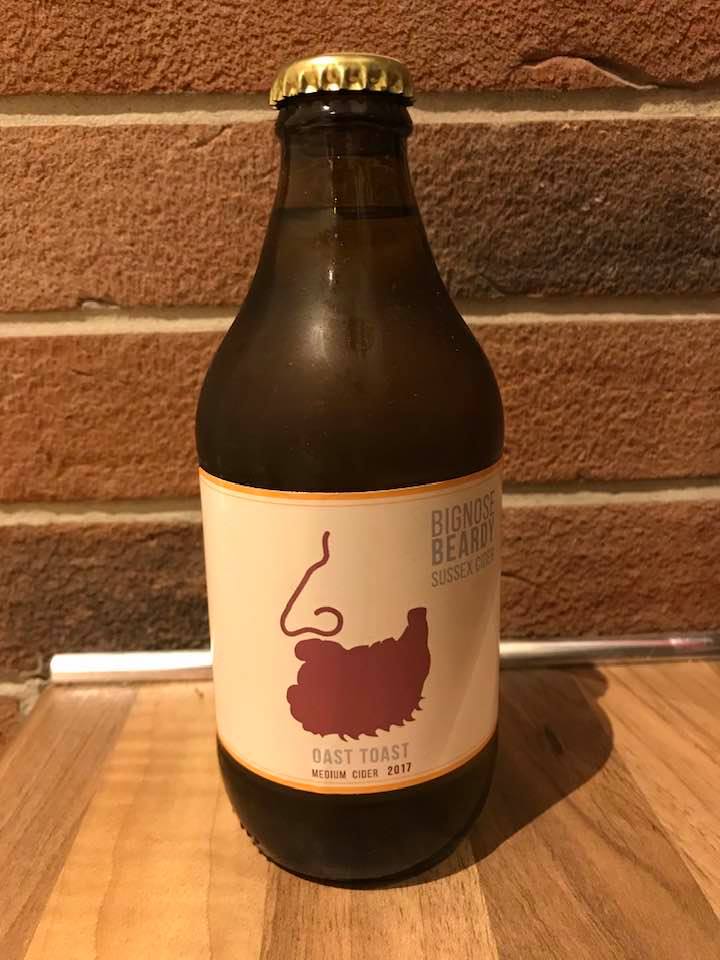 Colour: Pale Gold. The lightest (and I mean the lightest) haze.

On the nose: A little softer and rounder than Boars Head, though still delicate. Pears and white flowers rather than citrus. A gentle casky musk. Apple skin and brazil nut. A dab of pith, a white Rhône-style smatter of bacon rind. Again, very clean.

In the mouth: The flavours follow the aromas very nicely and neatly. As with Boar’s Head this is the drier end of medium; nothing cloying in the least. A little woodiness, some chamomile and soft fruits. It’s subtle and fresh and rounded – no tannin and no bite from acidity. Perhaps, picking a nit, a shade too subtle. All nicely balanced though; there’s something of the central Italian white to it. A winner with seafood, I dare say. 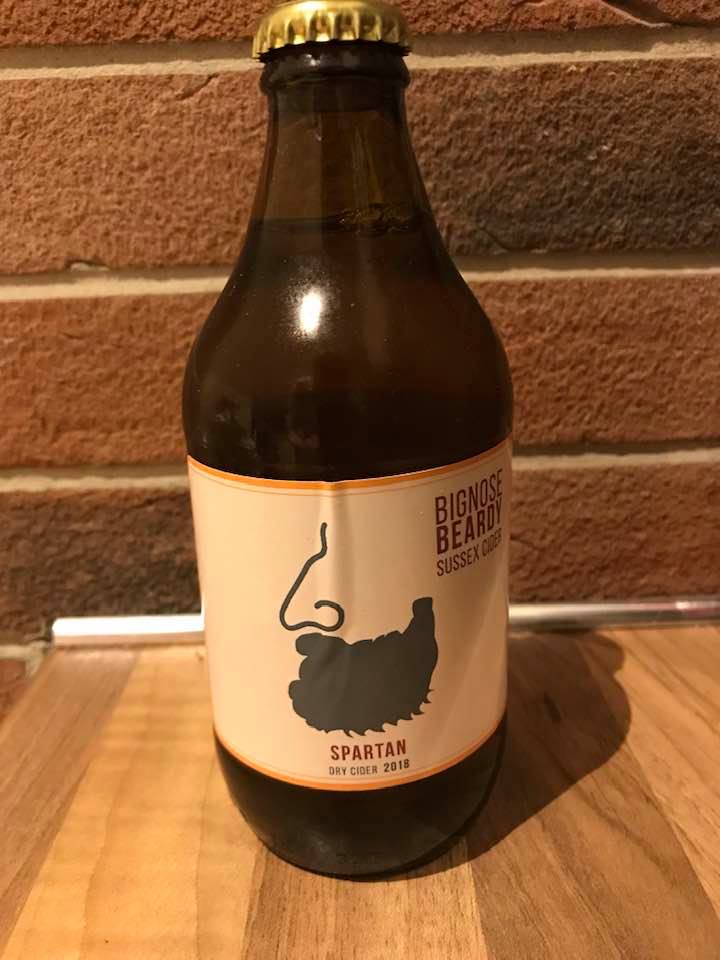 On the nose: Golly. Instantly the boldest of the three, and so ripe that the aromas express themselves with genuine sweetness. Mixed berries, baked apples, sherbet lemons. It’s a bit like sniffing a whole bag of skittles. Spices in vanilla, clove and nutmeg form.

In the mouth: First things first: concerns over – go tell the folk at Ross on Wye that this, obedient to their laws, is dry*. A big, mouthfilling palate that is, on the one hand, fulsome and ripe with sweet fruit and on the other hand bone dry, laced with rasping (not astringent) tannins and nibbly acidity. There’s a load going on. Still that strawberry skittles and cherries thing atop vanillins and lignin. There’s a rich note I keep coming back to that’s reminiscent of cognac or perhaps (suggestion?) calvados. Teeters in the direction of mildly acetic, but just veers clear. I really like this. A big, clean, seriously tasty cider. Miles away from any Bignose & Beardy I’ve had before. And another cider that sticks two fingers up at the old West country vs Eastern counties style definitions.

I like all three of these, though the Spartan is my favourite by a stretch. If I were filling my own half case I’d take three of the Spartan, two of the Boar’s Head and one of the Oast Toast. But I’d happily buy and drink all three of them again. Each one is admirably clean, wonderfully distinct from its stablemates and expressive of its fruit. At £3 a go, all are recommended. And here’s hoping that their next batch of Spartan is as good. Though, hopefully, in a new and ever-so-slightly different way …

In the usual Malt spirit of cards-on-the-table-ness, these three were all sent our way by Bignose & Beardy. Though, as ever, free samples oil no greens. And in any case, we’ve since paid them back. That’ll learn ‘em.

*If I can’t fill my reviews with weird, ultra-esoteric asides for no one’s benefit but my father’s then what on earth is the point of anything?