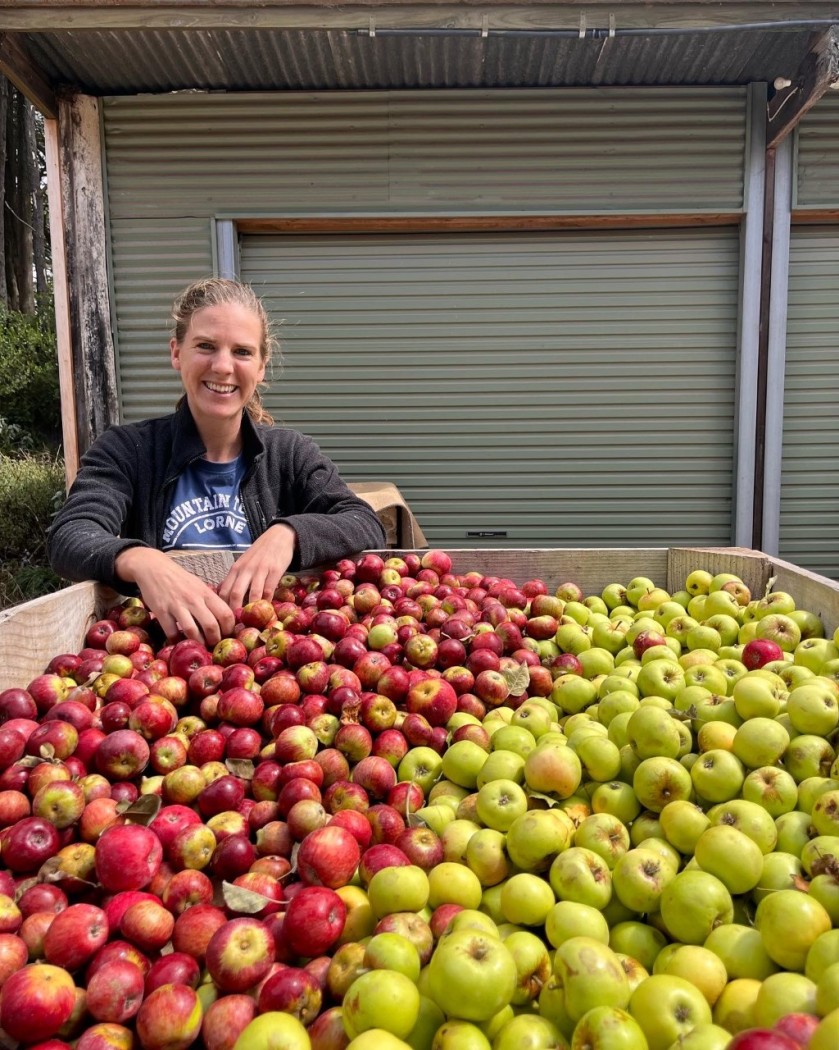 One of the great joys of the Cider Salon – indeed of any big tasting – is in meeting producers I have never previously come across, and tasting ciders and perries I’ve probably not even heard of.

But this year, the person I was perhaps most interested to have met hadn’t even been exhibiting at the show. Camilla Humphries is the cidermaker behind Camilla’s Crush in Australia. She had been travelling around the cideries of the UK and the rest of Europe and her visit happened to coincide with the Salon. Standing out as probably the only two people in attendance carrying notebooks we ended up chatting at the Domaine Dupont stand and she kindly agreed to answer a few questions about the Australian cider scene.

Australian cider is something I find absolutely fascinating, yet know barely a thing about. My interest was piqued by books such as World’s Best Ciders by Pete Brown and Bill Bradshaw, The Cider Insider by Susanna Forbes and Gabe Cook’s Ciderology. Later I read Bill Bradshaw’s account in Full Juice of a visit to the country’s cideries with the utmost envy. In one of the very first cider interviews I conducted, with the legendary Andrew Lea, he remarked favourably on the Australian scene, pronouncing himself very impressed with both the creations and the level of technical knowledge possessed by the predominantly former-winemaking producers.

My only visit to the country was before I started writing about cider. I visited the wineries of Hunter Valley and the whisky distilleries of Tasmania, but the cider passed me by entirely. It was only later that I learned that Tasmania was home to a thriving cider community, and by then I had no opportunity to get my hands on any.

A little while ago, Cider Australia, the body that represents cider and perry making in the country, launched a campaign that caught my interest. Its tagline was ‘Made like wine, drunk like beer’. James commented on it in his Back to the Future article over a year ago. Since most of the makers in the country seemed concentrated in the same area as its fabulous wine scene, my curiosity was piqued even further. But the opportunity never presented itself either to taste the ciders or deep dive into the culture.

Which was why I was delighted that serendipity caused me to bump into Camilla and very grateful that she allowed me to email over some questions about Australian cidermaking in general and her own in particular.

CR: Firstly, introduce yourself and tell us how you came to cider?

Camilla: I am an Agricultural Scientist and grew up on the family apple orchard in Red Hill on Victoria’s Mornington Peninsula. I studied oenology as part of my Master’s degree and then went to Sonoma California to do a wine making internship. On my return home, I wanted to utilize our apples and so adopted the same methods of wine making to making cider and have now been producing boutique quantities of commercial cider for the last four years.

CR: Tell us about the cider scene in Australia – how old is it, how big is it. How is cider thought of there?

Camilla: The cider industry has been growing over the last decades. There is very minimal production of cider cultivars in Australia which are generally grown by smaller cider producers. The commercial apple industry is culinary fruit only with an annual production of 300,000 tonnes . Of the total tonnage, approximately 30% of the fruit grown is wasted which provides great potential for the cider industry to value-add fruit.

CR: Where do the apples grow mainly? Tell me about the bulk juice vs smaller grower scenario?

Camilla: We have cooperatives where the surplus fruit is pressed into juice, however returns are too low for this to be sustainable for smaller growers.

CR: Australia has a huge and stunning wine scene. Does that influence the cider scene at all? And in what ways?

Camilla: The cider industry in Australia is 20 years or so behind the wine industry from the perspective of consumers’ understanding of the product, styles and terroir. However, we are developing in a similar way and hope that it won’t be long before the average Australian drinker understands the different styles of cider and knows which they prefer.

Saying that, cider is wine, and there are many cross overs between the industries. From production methods (many of our cidermakers are also winemakers), to distribution and sales channels (which are often the same), to the way cider is paired with food.

CR: What varieties are being used, and what styles of cider are predominantly being made?

Camilla: The Australian Apple Industry has a production value of $500 million across 10,000 ha, 45% of production being in Victoria. Where there is a growing number of craft cider producers.

The varieties being used are mainly culinary fruit including pink ladies, granny smith and golden delicious. The smaller boutique producers are making cider from cider cultivars.

CR: I believe you’re based in Victoria? Can you tell me about the climate and terroir there and how that influences the apples and ciders?

Camilla: The areas where fruit is grown for the cider market in Victoria are mainly the Gippsland region, Bellarine Peninsula, Yarra Valley and the Mornington Peninsula which are temperate climate regions with good average rainfall.

CR: Where are the other main regions of Australian cider production and do the sorts of ciders being made vary distinctly from region to region?

Over the past 5 or so years craft producers in Australia have been making drier, traditional styles of cider to keep up with the evolving tastes of consumers. The most popular style of cider continues to be the New World medium sweet class made with Australian grown dessert apples. These are clean, mostly clear, fresh and fruity, served cool, to suit the Australian climate.

CR: Who are the most influential makers in terms of quality Australian ciders – the people who cider lovers really need to know about? Can you tell us about some of what they make?

Camilla: Willie Smith in the Huon Valley Tasmania has led the way on bringing traditional styles of cider (which are not easy to find in Australia) into the mainstream market. They also have a big emphasis on sustainability and grow their fruit organically.

Hills Cider from South Australia has been an important driver of craft cider in Australia since they were established in 2010. The have retained a focus on supporting local farmers and driving national distribution of quality cider.

FUNK Cider in Western Australia and DV Cider in Victoria are two newer players in the Australian market that are experimenting with ferments and offering customers a full experience at their cidery cellar doors.

CR: Lets talk about your own ciders. Tell us about how and when your cidery came about and the sorts of ciders you’re making.

Camilla: After returning from a wine making internship in California, I thought it would be a good idea to come back and make cider from the apples grown on the family hobby orchard.  My architect father has been a great supporter of my cider project built me a cidery and cider lab within his existing workshop shed servicing the orchard.

I adopt a wine making approach to cider making using wine yeasts. I filter and do a secondary ferment in the bottle. Over the past few years my cider has been made from culinary fruit including high acid varieties such as Gravensteins and Jonathans combined with my favourite dessert apple Cox’s Orange Pippin which provides good aromatics to balance the high acid. I now grow cider cultivars including: Kingston Black, Yarlington Mill, Improved Foxwhelp, Dabinett, Brown Snout, Michelin and Bulmers Norman. As we had a poor biennial crop this year, I relied on my cider making friends Lisa Creswell from Seven Oaks and Tony and Jane Kiel from Fingal Farm, both on the Mornington Peninsula, to provide extra cider cultivars. This year’s cider was made from a third culinary fruit and two thirds cider cultivars which has provided far higher tannin and complexity in this year’s vintage which I am very happy with.

Camilla: I like to make a contemporary dry style cider with lots of effervescence from the secondary ferment in the bottle rather than through forced carbonation. I think the style of cider made should in essence reflect the type of apples used and really make the fruit the champion of the drink. My cider making style is evolving and my cider investigative tour through the UK, Europe and the US will certainly have an influence on the type of ciders I make in the future.

CR: You’ve been undertaking a tour of UK and European cideries. What inspired that and what have been the most important things that you’ve gleaned from your tour?

Camilla: I was awarded a Churchill Fellowship back in 2020 to investigate cider production and learn about the cider industries in the UK, Spain, France, US and NZ. The aim of my project is to bring back new ideas to expand the Australian Craft Cider industry, encourage collaboration amongst apple growers, processors, and cider makers, improve labour efficiencies and ultimately improve quality and economic returns to create a sustainable industry.

CR: Have there been any cideries that have particularly inspired you whilst over here? Which and why?

Camilla: I have visited a multitude of cideries in the UK including cider producers making fine cider marketed to the wine market, some cider farmers who are growing most of their fruit and selling cider as it’s traditionally known and others being larger commercial operations like Weston’s which has a rich family heritage over 5 generations and is making cider from 100% apple juice in mass volumes. All very inspiring and very good to get different perspectives. I will be writing a report for my fellowship so stay tuned for details!

CR: Cider can feel quite insular sometimes. How important do you think it is that makers from different regions and countries share knowledge and experience?

Camilla: Incredibly important to cross pollinate ideas and learn from each other’s industry as I am doing. I have met many cider makers who are willing to do collaborations – learn different techniques and continue to experiment to adapt to a diverse range of consumers.

CR: What do you feel UK cider maybe has to teach Australian cider – and vice versa?

Camilla: The Kent producers have convinced me that very good quality ciders can be produced from culinary high acid fruit. The Herefordshire and Somerset producers have shown me the complexity of cider made from bitter sweet and bitter sharp varieties and how interesting ‘wine style’ cider can be made using innovative fermentation techniques and some barrel ageing.

CR: Do you have particular projects in mind to work on once you’re back home? Can you tell us about them?

Camilla: My main aim is to disseminate my research findings from my project to all industry stakeholders including Cider Australia, the Australian Apple industry as well as through my local Agricultural Show at Red Hill. I would not only like to disseminate my findings but try and actively implement some strategies with industry to make change. I would also like to increase the production for my own cider brand Camilla’s Crush.

CR: What would you like to see develop in the Australian cider scene over the next few years?

Camilla: Increase the Australian Craft Cider percentage share of the market from 10% to 30% and see more apple growers planting cider varieties with some contracts in place with cideries.

Huge thanks to Camilla for taking the time to talk to us and shed light on the Australian scene. All the best with Camilla’s Crush – we hope we get a chance to taste it at the Cider Salon one day!