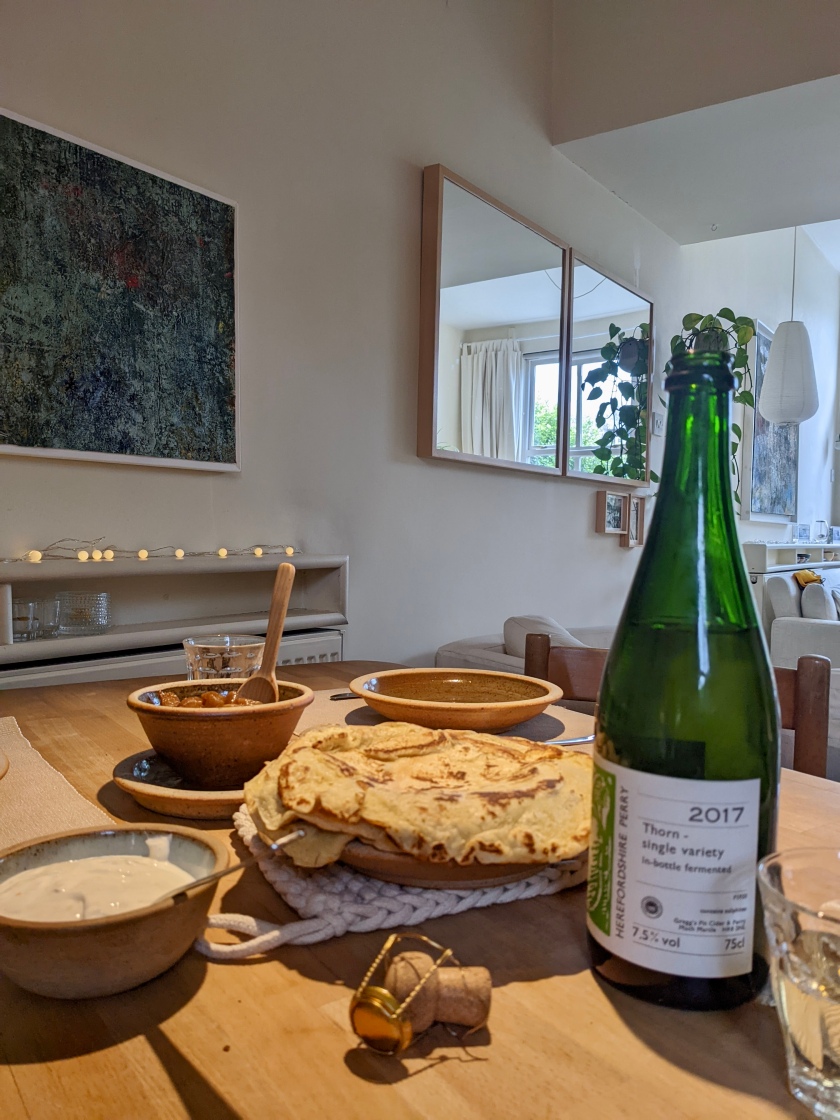 It seems I’m really rather good at suggesting an idea for an article over at Cider Review, thinking that someone else might be interested in writing the thing that I’ve suggested but then getting talked into writing the thing I suggested.

Now, if you don’t already know, I like cooking and I like to think I’m quite good at it. Every quarter I will aim to give you a recipe and a cider or perry to pair with it. We probably all have our favourite cider and food pairings. One of mine (and editor James’) is Steak and Raison d’Etre. This will almost certainly get covered at some point but I’m hoping that my quarterly offerings will be a little more in depth than this, but when I’ve run out of ideas you’ll know.

I suppose you’re wondering what this one is going to be about…well, as it’s Pancake Day (Shrove Tuesday) on 1st March it seemed like a good opportunity to explore pancakes and recipes involving apples and pears.

In my hurried searching for historical links to apples / pears and pancakes I found some references to how Shrove Tuesday may have been marked in the Tudor period; Pancakes with Apple Pap. Sounds a bit watery and miserable if you ask me BUT, it makes sense as lemons and sugar – being produced overseas and shipped to England – would most definitely been the preserve of the rich.  Apples and pears grew outside the back door.

In honour of this old recipe, but you know, to make it nicer, this year I’ll be serving up pancakes with sauteed cinnamon pears and a dollop of orange zest infused soured cream.  I’ll serve this alongside a bottle of Gregg’s Pit Thorn Perry, a wonderful bottle that’s been beautifully crafted (£21 from The Cat in the Glass). When I say it’s been beautifully crafted, what I mean is that it is really the most incredible perry that I have had the opportunity to sample. It’s a drink that is oozing with quality. On the nose you get freshly cut grass, citrus and a massive hit of elderflower and that’s pretty much what you get on the palate, just with the addition of the biscuity taste you’d find in a champagne. It’s really something and works wonderfully well with the pancakes, cutting through the sweetness of the sauteed pears and leaving you wanting more.

For the sauteed pears;

First, mix your pancake batter ingredients (with a whisk) and stick it in the fridge. If you can do it the night before then I’d always recommend it.

Next, zest the orange and mix with the soured cream, pop it in the fridge.

Pop your oven on a low heat (60 degrees should do it) ready to pop your pancakes in to keep warm.

Chop your pears into chunks and sauté in a pan over a medium heat with the butter and sugar and cinnamon. After a few minutes the pears should be fairly soft, not mushy – you still want a bit of bite to them. Pop a lid on your pan and set to one side.

Grab your pancake batter out of the fridge and start cooking. I usually aim for fairly thin pancakes, think crepes instead of the fatter American style pancakes.

Once you’re done cooking the pancakes, grab the cream from the fridge and serve immediately with a delightfully chilled glass of Gregg’s Pit Thorn Perry.